When you think of corn, what do you picture? Delicious, buttery ears waiting to be eaten? Acres of golden fields? Well, if you were a resident of Lawrence, Kansas, in 1938 and 1939, corn would have brought to mind huge crowds and athletic drama.

In June 1938, organizers of the annual National Cornhusking Contest announced that the next year’s event would take place in Lawrence. City residents had campaigned for the chance to host, and it was quite a coup for Lawrence. Such a famous sporting event would be a much-needed economic windfall for an area still reeling from the Depression and the Dust Bowl.

The National Cornhusking Contest was a sort of farming Olympics (albeit for one event) that required a great deal of preparation. “A half mile-long block of tents filled with vendors and company displays formed the pop-up village fittingly named Cornville,” explains Watkins curator Brittany Keegan. “Schools, entertainers, farmers and farming supply manufacturers, and public officials, including Kansas’s governor, contributed to the events.” 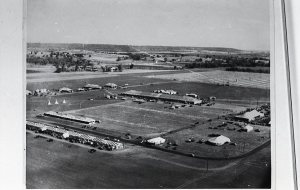 Festivities kicked off on November 1, 1939 with musical and other performances, including a traditional Apache dance by students from Haskell. Day Two was Farm Power and Equipment Day.

The main event—the contest itself—took place on the third day. An audience of over 100,000 watched as twenty-two contestants—each with his own wagon, judge, and “gleaner”—paraded onto the huge cornfield and set up before their assigned six rows of corn apiece. “The contest officially began,” Brittany recounts, “when Kansas Governor Payne H. Ratner ceremonially lit the fuse on the starting cannon at 11:45 a.m.”

How does one play the sport of cornhusking? “There are fairly simple rules for the complex sport,” says Brittany.  “Each husker gets eighty minutes to pick the corn from corn stalks up and down their designated rows, husk the picked corn, and deliver it (usually by throwing it) to a wagon.” Each contestant’s judge inspected a sample of the picked corn and deducted points for corn left standing or poorly cleaned. The gleaners picked up ears left in the field.

In the end, Lawrence “Slim” Pitzer of Indiana won the 1939 National Cornhusking Contest for picking the best crop. It had been an exciting event for the people of Lawrence and the many others who participated and watched. The contest continues to be held annually.

Now, seventy-six years after the National Cornhusking Contest came to Lawrence, we at the Watkins Museum are featuring a new exhibit titled “Four Days in Cornville.” If you’ll be in the Lawrence area on Friday, August 28, we encourage you to stop by and attend our Final Friday opening celebration anytime between 5 and 8 PM. You’ll probably never think of corn the same way again!

Souvenirs from the contest.